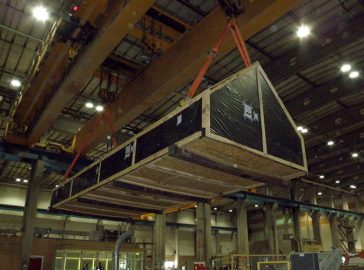 When it comes to logistics challenges, moving an entire decommissioned paper mill from the UK to China has to be one of the toughest we’ve faced.

A task of this sheer magnitude; approximately 6000m³ of break bulk cargo had to be packed and shipped nearly 12,000miles. So how did we roll out a successful move for our Chinese client?

Over the course of six months, the dismantled paper mill was packed and shipped via Sheerness, UK to Beiliang, China on the chartered vessel Yong Sheng.

Working closely with packers and dismantlers on site, our project team optimised the transport flow for both containers and conventional cargo. The total operation consisted of 450  containers into which 6000m³ of break bulk cargo, which were transported from the factory site in the UK to Dalian Port, China. For maximum efficiency, the vessel was routed via the Northwest Passage to give a transit time of just 27 days.

Once at their final destination, the 450 shipper’s owned containers were also utilised as on-site storage as the paper plant was reassembled at its new home.

Back to Case Studies
Back To Top